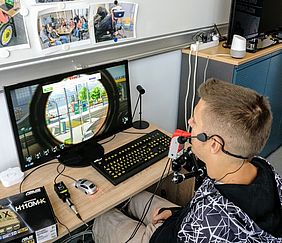 On the 25th of June 2018 we conducted the first test with a functional prototype of the IntegraMouse Plus enhanced by voice input. Mario, who has already been working with the IntegraMouse Plus for several years, was again on board and tested the new features developed within the WIFI project for the first time. Following the introduction at LIFEtool, he will now conduct an evaluation phase at home for a period of about a week (testing the new IntegraMouse features e.g., in computer games). Completing this first user test, there will be a separate evaluation meeting during which we will not only collect qualitative feedback but also information related to User Experience and task load. The first impression was a very positive one – the new prototype allowed for using functions in a very fast and simple way that until now could only be accessed following a number of complicated steps.