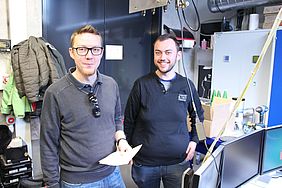 After several Wizard-of-Oz tests in the welding lab, the first user test that involved welding with the prototypes developed in the project under realistic conditions, took place on the 15th of March 2018. The test did not only focus on functionality and potential problems in the welding environment (e.g., caused by noise level or flying sparks) but also on user acceptance. Thus, we again used several evaluation instruments such as UEQ, Nasa TLX and an open questionnaire. Also, we recorded and collected a variety of welding noises and other environmental characteristics as a basis for later automated test under realistic conditions.